Planning for the cake started in October last year when she was inspired by a little hand blown glass coach.

“My husband Gavin and I were at Jupiters on the Gold Coast at a cake decorating seminar.  We were exploring the Sunday markets and saw the coach.  It was a perfect ball but it was in blown glass.  I took photos of it and thought wow there’s an idea for a Cinderella coach.

“I came home and in October last year I had two halves of plastic moulds which would join together and make a ball.  I moulded the icing into the two halves and cut the windows and doors out.

“That was the start of the coach and the castle for this year.”

Carol spends many hours searching the internet for inspiring ideas but never wants to replicate preferring to add her own spiel.

“I looked online at a lot of castles.  Pinterest is a great resource.

“I pinned many castles and then created mine from those ideas.  I had one main castle as a rough guide but of course it turned out totally different once my spiel was added.

“As an example I made these other horses that looked real but they didn’t go with the coach.

“My theme was fantasy so I then made some other horses.  I looked at Deviantart there were lots of like my little ponies.  By trial and error I made all those horses by hand with the pictures as a guide.  I just absolutely love them.” 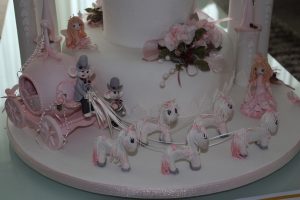 A dozen horses were made and discarded before Carol had her perfect six to draw her stunning carriage.

“There is a lot of trial and error and you always make one spare just in case.  This is all created just by my eyes judging if it is right and my hands creating.  Most things on the cake have been modelled free hand apart from two moulds that I have used.

“After the horses came the coachmen and then Cinderella followed finally by the fairies.  I had to decide how I was going to attach the horses to the coach which took some time.”

Over the years Carol has purchased many cake decorating tools but wants to share her discovery of the simplest.

“One of the most useful things I ever use in cake decorating is a simple metal meat skewer.  I use it for detailing, putting things into place, poking holes to insert things.”

The last part of the process was putting together the castle while keeping it in perspective to the stunning coach and horses.

“I struggled and looked at hundreds and hundreds of castles to make it all come together.  This time around I decided to use cardboard cylinders and cover them.

“I started at 8 in the morning and it was 6 at night before I finished the cylinders.  That was just covering them with icing.  None of them are toilet rolls!  The smaller turrets are wooden skewers covered.”

According to the judges’ comments the finished cake was a beautiful design, had great visual impact and showcased a fabulous display of techniques and attention to detail.

“I personally felt that the one thing that really stood out was that the cake had great visual impact and was so co-ordinated so it was great to have that acknowledged.

“It was a lot of trial and error.  Two days before we left I was pulling the fairies legs off as I realised that her legs were dangling down and I had to shift the cakes.” 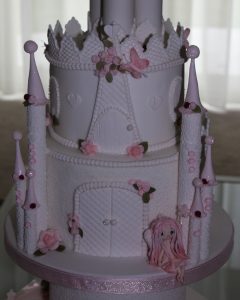 Even though all the admiration is about the decorating of the cake underneath the ponies, princesses and fairies is a precious gem.

“There are five mixtures of my fruit cake in there.  It is an absolutely beautiful cake to eat.

“For competitions you really have to do fruit cake so that it keeps forever.  For the castle the bottom cake and the top two layers are edible.  They are both supported on a special iced cardboard cylinder.”

After more than 250 hours and the cake complete the next challenge is moving it from their home in New Plymouth to the event in Auckland.

“We sit the cake on sponge rubber inside a cardboard box.  This cake went in two bits.  Gavin packs it into the boot so it can’t slide around. He spends a lot of time on the roads for work and is a confident driver.  When he has cakes on board he drives with more care than usual.”

“I never have any titivating to do on the day.   We just waltzed in, set my cakes down and lined the two cakes up, lined up the top bits, stuck our number on and waltzed out again.”

During the judging Carol and Gavin chose to go away as they both nervously wait for the results.

“Usually when we go back to get the results I send Gavin in.  I can’t look.  I can hear Gavin yell you’ve got a gold!  There were four golds given out.  I didn’t know at the stage if I was top, bottom or one of the middle golds.  You have to get between 90 and 100 to get awarded gold, so it’s pretty high scoring.”

“I probably will never do another castle cake now because to me that is my ultimate castle.  I just love it.  I absolutely love it.”

Carol’s cake decorating began 40 odd years ago when she stared at cake icing books and studied their techniques.

“The first cake I ever did started while I was sitting in the kindergarten.  I found this Alison Holst recipe for fruit cake.  I read it about 10 times and thought I could make this.  I went home and made it and then decided that I should ice it.  I knew nothing about icing then.”

“The humidity in the weather can affect your icing. I just kept adding icing sugar as it was runny.  The icing ended up being so stiff that I hurt my thumb pushing it through the nozzle.

“I went and asked the lady over the road and she ended up giving me six one hour basic lessons and I took it from there.”

While working at the AutoLodge as a receptionist and a cashier in the restaurant the chefs encouraged her to enter into the competitions.

“They said that they thought I was quite good and I should enter.  The first time I entered in 1990 I won a gold medal.

“Over the years I have made thousands of cakes for all occasions.  I have won 9 gold, 4 silver and 2 bronzes.”

Cake decorating helped her through a marriage break up and then in 2010 through the sadness of her son dying of cancer.

“I must have decided one day I would like to have another go at a castle.  When Tony was dying I said to him that I was thinking of doing another coach and castle and I might enter it in the competitions again.  I said if I don’t get it finished this year I will enter it next year.

“At this stage he knew that he was dying.  He said don’t put it off until next year you have to enter this year.  A few months later he died. I worked on the cake all day and every day.  It just took over my life to get it finished on time.”

Once the cake was finished Carol stopped making cakes for a lot of people.

“I decided his life was so short, how long did I know my life would be? and why did I want to spend all my time doing stuff for people all the time?  I was doing it ALL the time.

“I was working at night, cake making during the day and then gardening at the weekend.  I had no life really.  I stopped doing it for other people and just focused on family and close friends.”

Throughout the years Carol has been asked to teach others running classes at NP Girls High School and then helping at WITT.

“It’s not easy teaching people. I take my hats off to teachers.

“The thing I find hardest about teaching people is they expect to do what you do just like that.  They don’t realise there are 40 years hard graft and I now know what I am doing.

“I just do it … it is hard to explain sometimes to someone else.”

She was contacted by a few like-minded ladies and decided to teach from her home with some of the ladies still close friends today.

“We have always stayed in contact and meet regularly. We are great friends.

“We run ideas past each other.  Quite often we rub suggestions off each other and all have some input before the person reaches their own decision.”

Already Carol has started plans on her entry for next year expanding on her magical fantasy theme.

“I do the competitions every year because I can and it’s something that I can create for me.  I do it at my leisure.

“My grand daughter Caitlin is following in my footsteps and showing some great talent for cake decorating.  It’s great to see and be a part of.”

“I now do it for pleasure and joy.  I never want to give it up. I am hooked!