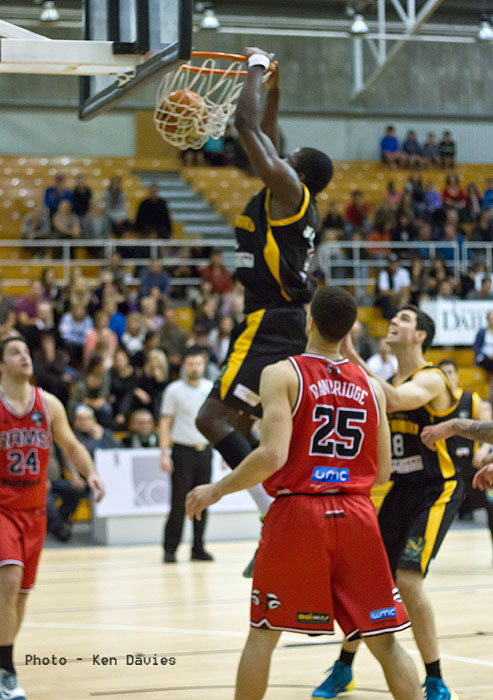 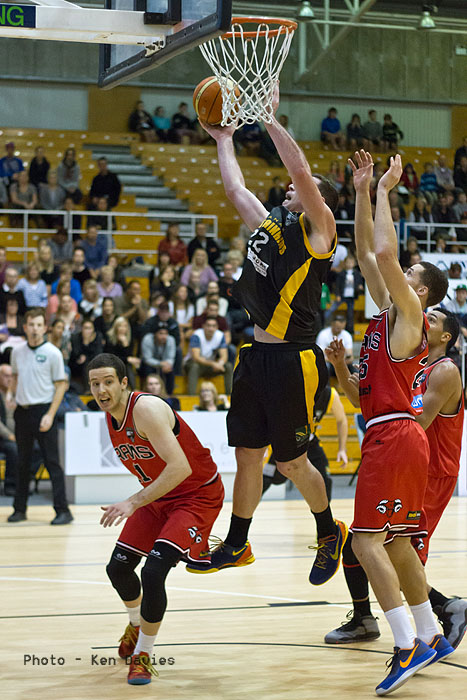 The noise was deafening and the crowd were on their feet for the final 37.1 seconds of the game at the TSB Stadium in New Plymouth as the Good Home Taranaki MountainAirs held off the Rams to claim their fourth win.

With the score 93 – 90 the Rams’ foul count soared as they fought with desperation for the win. Both Marcel Jones and Matthew Rogers clocked up the fouls and were shown the door late.

The fouls kept coming for the Rams with Jeremy Kench the last of the night. Suleiman shot 1 from 2 to end the game 98 – 93 a fourth win in a row for the Airs with the crowd roaring their approval.

Airs’ Coach Daryn Shaw said he thought the Rams had stepped up and played a lot harder than previously.

“Canterbury is a really talented team. They have got some really good players. They certainly did some things that caused us to adjust for sure.”

“Our four main guys really came to the party and played really well at the critical moments. I think it was an exciting game and all the boys played well. They (Rams) threw a lot of hooks at us that made us adjust but I think we always just grind it out.”

Adrian Oliver proved to critics he meant business netting 30 points with 4 from 8 three pointers, 8 from 15 two pointers and pulling in an impressive 8 rebounds.

Some exciting play from Suleiman Braimoh coming off a third week as Most Valued Player in the league added to the score with 25 points coming from 8 from 17 field goals, 9 from 15 frees, 8 from 15 2 pointers and a massive 16 rebounds along with 2 great steals.

Captain Aaron Bailey-Nowell had an outstanding and inspiring game adding 20 points to the score with 8 from 10 field goals, 8 from 10 2 pointers, 4 from 5 frees, 2 assists and 5 rebounds.

A sleeker, fitter and more focused Aaron has stepped up this season and the results tonight have shown it was all worth it.

“All we do when we get to training is run and sweat. Daryn has got us running all training and that’s why I’m withering away and I’ve got no kilos left.”

“I use that to my advantage and my quickness taking the bigger players off the dribble and I go around them instead of going through them like a bullet like I used to in those other years. It’s about biding my time and making sure that I stay aggressive and that way I can get into the game.”

“I try and lead from the front and that’s how I get the other guys involved. It starts at training. For me I just have to calm myself, stay focused, determined and aggressive. I have to make sure that the public gets to see me as a leader.”

Brad Anderson had a wobbly night scoring 20 points with 8 from18 field goals, 6 from 11 two pointers, 2 from 7 three pointers, 4 assists and 2 from 5 frees. When he was on he was he was awesome and then suddenly not but made the pressure shots when it counted assisting the team to claim the win.

“I definitely could have made a few more shots. I was making the good ones though. I made the ones that counted down the stretch. I was pretty average tonight it wasn’t my best. Overall it was a good game.”

The Rams fought right to the final whistle with the lead changing eight times and tied four. On paper their stats were good with rebounds 47 compared to Airs 38 and points in the paint 58 compared to Airs 52 but the night belonged to the Airs.

Coach Daryn Shaw jests that his secret to success was the early morning practices. “Every game we remind ourselves that we are the underdog. Don’t get too big headed here. Every game we have to work hard. I told them the 5am practices must be working and we’re going to keep it up.”

Sharyn Smart
Sharyn Smart is a freelance Writer who is relatively new to the sport of basketball. She is passionate about her community being born and bred in the Naki and has quickly come to enjoy following the MountainAirs.