Become a FRIEND and together we can save lives.
Over the next seven weeks representatives of the Taranaki Rescue Helicopter will be calling homes rallying for help – will you answer the call for help? 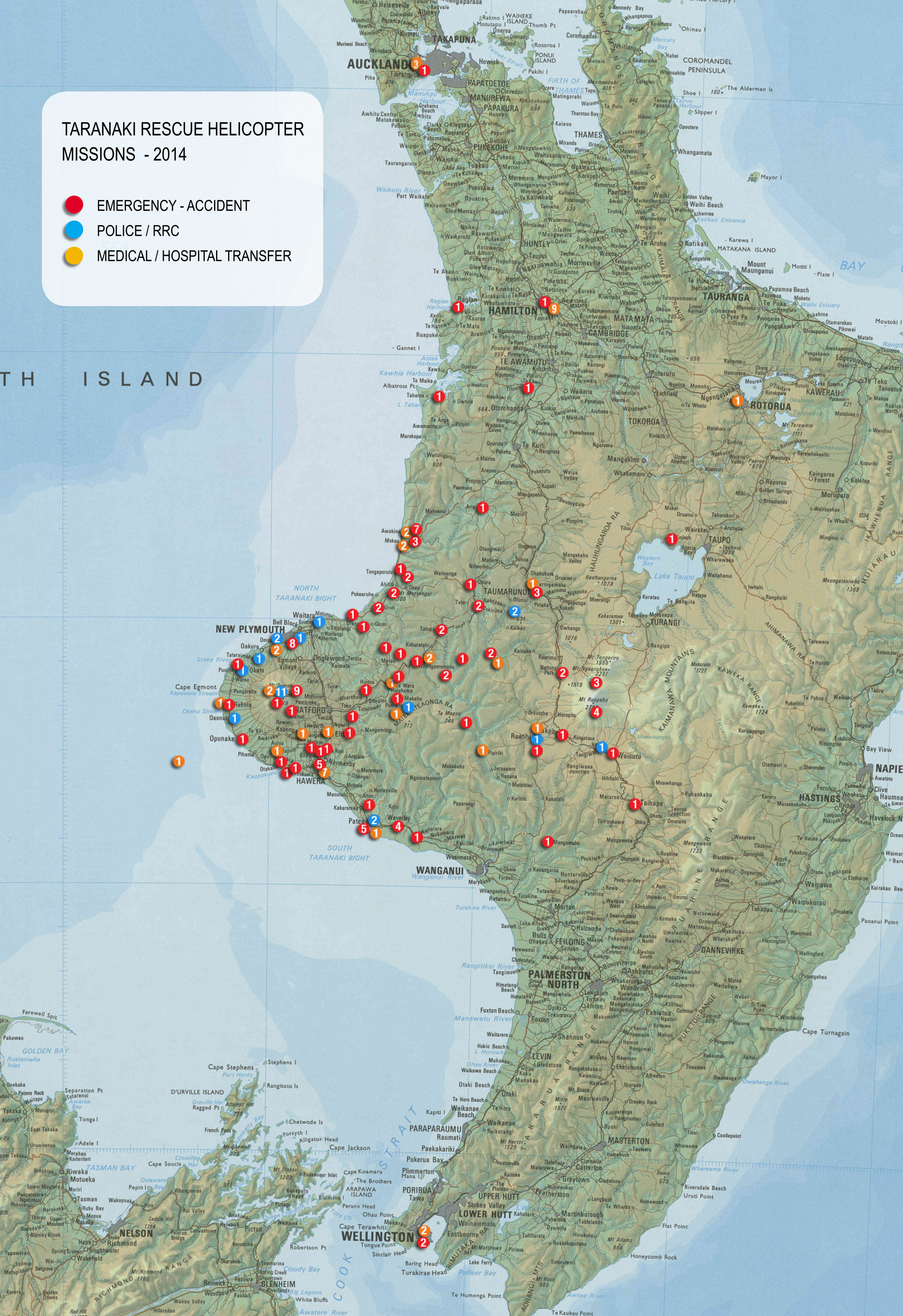 Mt Taranaki claimed 22 of the 178 missions flown in 2013 with 11 requiring the Taranaki Rescue Helicopter to assist Police and Taranaki LandSAR with lost or injured climbers.

The crew’s main rescue area extended beyond the 30 minute driving time radius around New Plymouth with missions requiring patients to be flown as far away as Auckland, Hamilton, Rotorua, Taupo, Taihape and Wellington to specialist care.

With Mt Taranaki in the backyard, recreational-based activities ie: skiing, snowboarding, tramping, kayaking, hunting accounted for 33% of the 109 emergency accident missions.  A further 45% of these missions involved either a motor-vehicle or motorbike.

Pilot Mike Parker thrives on the technical challenges relating to weather and location and how these impact on his decisions.  A mission that stands out for Mike during 2013 was on the 19th and 20th of July.  During a hospital transfer the weather closed in forcing crewman Jayden and Mike to head to Taumarunui for the night.

“I made him do over-time by not bringing him back to New Plymouth,” jokes Mike.

Within a few hours of their return the Police phoned for assistance on Mt Taranaki but “unfortunately the cloud was pretty solid and we couldn’t go,” recalls Mike.

A second call from the Police advising a patient had slid 600m down the mountain and was in worse condition prompted Mike “to try and find a way up the mountain.”  Flying around to Stratford, the cloud cover was quite broken up enabling Mike a small window of 20 minutes “to get back down through the gap.”  “It’s a terrible environment up there and it can turn really quickly.  The mission was very tough and technical.”

Mike managed to balance cloud cover, reduced visibility, the position where the patient was, the weight on-board the helicopter (fuel and people) and fading light to successfully rescue the patient dropping back through the cloud “hole” with only minutes to spare.

Chief Crewman Jayden Strickland has two roles within the team.  “My priority is the aircraft initially and then I turn into an Emergency Medical Technician assisting the Paramedic.”

A mission that stands out for him was a motorcyclist who hit a car at 100km per hour on the Uruti straights.  The initial report from 111 emergency centre was the patient had a broken leg. “When we arrived on the scene fire and police were already there and the situation was not great.”

“The medic had to work really hard to stabilise the patient.  The patient’s body was shutting down peripherally with blood centering on the core to keep vital organs going.”

“Uruti is close to town (34 minute drive) but the time saved using the helicopter and getting expert attention so fast was, I believe, life changing, as it is with many of our missions.”

For a small annual donation of $50 you can join the FRIENDS of the Rescue Helicopter membership programme. As a FRIEND, the Trust will transport you back to Taranaki Base Hospital if you are hospitalised outside of the region and require a return to Taranaki Base Hospital for an extended period of recovery in hospital and your only option is to go by road.  You will be transferred by fixed-wing or helicopter.  Special conditions do apply. Donations over $5 qualify for tax rebate.
For further information please contact the Taranaki Rescue Helicopter on